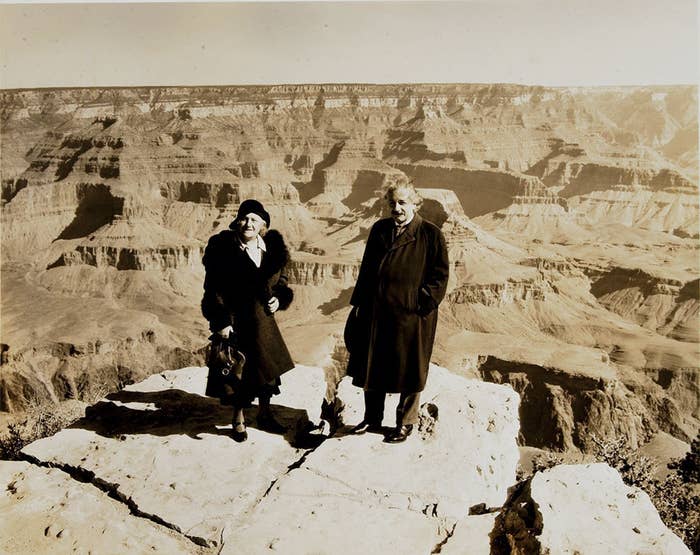 The “theory of general relativity” says that time isn’t constant, but is different for everyone.

If I’m moving fast, or if I’m closer to something heavy like the Earth, then time will pass more slowly for me than it does for you.

He had published the “special theory of relativity” 10 years earlier, while working as a patent clerk in the Swiss city of Bern.

That’s Arthur Eddington on the right, and Hendrik Lorentz in the middle, sometime in the early 1920s.

Eddington travelled to west Africa in 1919 to view an eclipse. According to Einstein’s theory, the mass of the sun should bend the starlight coming from behind it, so stars around the sun should appear in a different place. They did – and although later it was questioned whether Eddington’s measurements were precise enough, Einstein’s theory has been emphatically confirmed since.

This is Einstein with his wife, Elsa.

Aboard the SS Kitano Maru, during their travels to the Far East in 1922.

The physicist Max Planck awards the Planck medal to Einstein, 1929.

Planck was one of the first pioneers of what became quantum theory. He won a Nobel prize for it, while Einstein remained a lifelong opponent of many of its implications.

In 1933, Einstein travelled to the United States.

This is him on an earlier trip, aboard the SS Deutschland, in 1931.

He fled his homeland for good when Hitler came to power in Germany.

He travelled first to England – here he is with Winston Churchill at Chartwell, Churchill’s country home – and then to New York.

As a German Jew, he rightly feared the Nazi party’s anti-semitic stance.

This is Einstein at home in Princeton with a group of Jewish refugee children, 1941.

He lived the rest of his life in the USA. During the Second World War, he warned the US government that the Nazis were trying to build an atomic bomb.

His intervention was key in starting the Manhattan Project, the American effort to build a bomb, which led eventually to Hiroshima and Nagasaki. However, Einstein himself – as a left-leaning German – was denied the security clearance to work on the project.

Einstein receives a citation as a “modern pioneer of science” at the Copernican Quadricentennial, Carnegie Hall, New York, 1943.

After the War, he came to regret his involvement in the creation of the bomb.

He told Newsweek magazine that “had I known that the Germans would not succeed in developing an atomic bomb, I would have done nothing”.

This is Einstein at his home in Princeton in 1950, recording a statement for the TV show Today with Mrs Roosevelt.

He was offered the presidency of Israel in 1952.

He had always supported the creation of a Jewish state in what was then the British Mandate of Palestine, so David Ben-Gurion, the first prime minister of Israel, offered him the presidency. Einstein turned it down, saying that he was unsuited to the role, but adding that he was “at once saddened and ashamed” that he could not accept.

Here is Einstein with Ben-Gurion, at Princeton, a year earlier.

The last 22 years of Einstein’s life were spent at Princeton University.

He first visited in 1921, and was given a life membership of the university’s new Institute for Advanced Study when he arrived in the USA in 1933. He never left.